But US government says no

The Trump administration is pressuring Thailand not to ban three pesticides that scientific research has shown to be particularly dangerous to children and other vulnerable populations.

You know it’s a dark day for America when foreign leaders have to lecture US officials about the importance of prioritising public health over corporate profits.

Thailand’s leaders have said that as of 1 December, a ban will take effect on the use of the following farming chemicals: chlorpyrifos, an insecticide made popular by Dow Chemical that is known to damage babies’ brains; Syngenta’s paraquat, a herbicide scientists say causes the nervous system disease known as Parkinson’s that has been banned in Europe since 2007; and Monsanto’s glyphosate herbicide, which is linked to cancer and other health problems.
Dow, Syngenta and Monsanto have each merged their way to become bigger corporate behemoths in recent years, wielding their power in Washington to keep their money-making pesticides on the market. They are not having as much luck keeping foreign leaders in line, however, amid growing global awareness of the risks many pesticides spell for human health.

Thailand joins dozens of countries that have already banned or are planning bans on paraquat, chlorpyrifos and/or glyphosate. Thailand’s national hazardous substances committee voted last month to ban all three due to the dangers established by scientific evidence.

Thailand’s leaders were motivated in part by research showing that use of these chemicals in agriculture not only puts farm workers at risk, but also endangers consumers because the bug and weed killers’ residues persist in fruits, vegetables, grains and other foods.

In the United States, pesticide residues are so common in domestic food supplies that a Food and Drug Administration report issued in September found more than 84% of domestic fruits, 53% of vegetables, and 42% of grains sold to consumers carried pesticide residues.

US regulators parrot industry talking points as they insist that dietary exposures to pesticides are nothing to worry about and say any risks to farm workers can be mitigated with proper training, protective clothing and other measures.
According to Thai news reports, US officials have also been warning that the ban will interfere with lucrative trade. The US is especially upset about a glyphosate ban, arguing that it could limit hundreds of millions of dollars in Thai imports of US grains, which are often laced with glyphosate residues.

Outraged Thai officials say they have been forced to “clearly explain” to US officials that Thailand’s priority is the health of Thai consumers. “Our job is to take care of the people’s health,” the public health minister, Anutin Charnvirakul, told the press.

If only US leaders had such moral clarity.

It may be disgraceful, but it’s certainly not surprising that the Trump administration is working to protect glyphosate and other pesticides that bring profits to big corporations. The agrochemical industry players are devoted donors to the political machinery that runs Washington and they expect a return on their dollars.

Chlorpyrifos was scheduled to be banned two years ago from US agricultural use but when Trump came into office the EPA decided to delay any action until at least 2022. The agency is currently updating its risk assessment of paraquat, seeking public comments through 16 December; but it appears poised to allow continued use, albeit with restrictions. And earlier this year the EPA affirmed that it continues to find no health risk associated with glyphosate.

One example of the US government's fealty was laid out in an internal Monsanto consultant’s report made public through litigation against the company. The report quotes a White House policy adviser as saying: “We have Monsanto’s back on pesticides regulation. We are prepared to go toe-to-toe on any disputes they may have.”

There is no shortage of scandal to alarm and divide Americans. It is often easiest to simply ignore the headlines and convince ourselves the partisan battles don’t actually affect us. But when it comes to the food we eat and feed our families, we only harm ourselves when we ignore policies that literally promote the poisoning of our children for profit. We can’t afford to look away from this.

A mountainous region in eastern India, Sikkim recently became the first state in that country to go fully organic.

The Chief Minister of Sikkim announced this vision for the state’s 290 square miles of agricultural land in 2003, in response to the serious environmental and health problems resulting from chemically intensive farming methods. A combination of political will, use of local farmer’s traditional knowledge and the willingness to share technical know-how made this vision a reality. 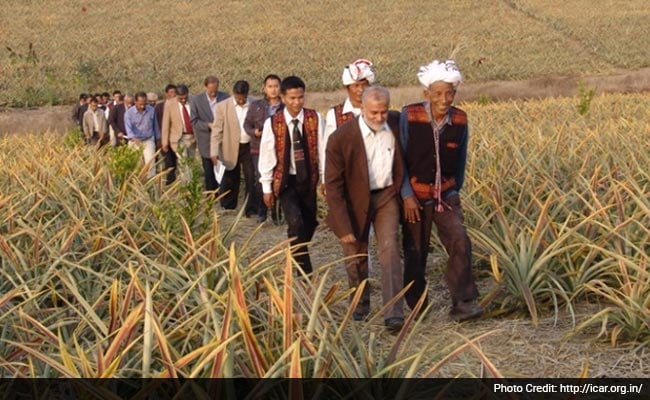 This news is especially encouraging coming from India, which has very high rates of pesticide use — and where media stories abound about farmer suicides and pesticide related cancer clusters. This is also a wonderful model to point to as we struggle to make our own agricultural system in California safer for some of the most vulnerable members of society — our children.

The transition of Sikkim to a 100% organic state means three things: the state’s environment is better protected, the health of Sikkim families is not undermined by pesticides, and farmers get a better price for their crops. The state’s tourism sector has also gotten a boost. A few resorts have started marketing themselves as destinations where tourists can pluck, cook and relish fresh organic food from kitchen gardens.

So with people, planet and profits all covered, the triple bottom line concept has been successfully implemented in Sikkim.

To make the state fully organic, every farm needed to get organic certification from an independent certifying body. The state government passed a law banning the use and sale of any pesticide in Sikkim, with a substantial fine and jail term penalizing anyone breaking this law. On January 18, 2016 the Prime Minister of India declared the state fully organic.

Along with a variety of vegetables, Sikkim’s organic food products include paddy, wheat, spices (such as large cardamom, turmeric and ginger), flowers and mandarin oranges. While the state’s farmers get a good price for their crops, they continue working hard to improve yields from their organic farms, with the support of the state government.

Organic agriculture, as part of an agroecological approach to farming, provides real solutions to a variety of problems, including:

In a world facing increasingly fickle weather patterns, falling economic returns for industrial farmers and an avalanche of pesticide-related health harms, agroecology seems the only logical way forward. Sikkim is one more case in a string of many that shows the feasibility of moving towards agroecological practices.